MICHAEL SELLERS was born in Windsor, UK.  After studying art history he worked in galleries in London and Sydney. His role as Director of The
British Crafts Centre took him around the world before accepting the position of Culture Director in Papua New Guinea. After settling in Somerset with his family he contributed to art magazines before writing fiction. There are four books in the CAL FISHER detective series.
AN OUTSIDE MAN is an historical novel set in Somerset, England and the South  Pacific.
A BRUSH WITH ART is a humorous account of sales clerk, ARTHUR, desperate to be an artist.
Books first published  MACMILLAN LONDON LIMITED - CHIVERS PRESS  ENGLAND = DOUBLEDAY &  COMPANY. NEW YORK. USA and German Edition: SCHERZ. Books available through Barnes & Noble, US, other bookshops and       AMAZON.UK. & U.S and worldwide.
E-Books on Kindle, IBookstore & Nook.

Message from Michael -  "Two events to shout about; A new novel; JACK'S GENES. Jack Bowes' existence had been nigh on perfect; a successful career making pots, a woman he adored and planned to marry and an independent and vigorous outlook on life. Perfect until he was diagnosed with a cancer, an unexpected discovery that was to be followed by even more bizarre discoveries that cast a series of shadows over his wife to be and all his known relations. As the truth painfully unfolded; taboos exposed, incest and rape, the story was scandalised in the press. Such was the public interest a book and a film was commissioned with Jack's story as the main theme. To escape the attention Jack takes a position in Papua New Guinea where he finds an old and trusted friend not to be the man he once knew. With political and sexual coercion rife Jack struggles to balance the demands of the unpredictable and exotic while resisting the personality assassination back home in England.
And A PART WORTH PLAYING; the story of actor DEREK FOWLDS life, written by Derek and me. From an apprentice printer and an armed forces disc jockey to the West End, to Broadway, to movies and world-wide television, Derek Fowld's flourishing career in drama echoes British drama itself. It was a time of daring, of experimentation and broken rules where the classical was celebrated and modernity embraced by thespians and public alike. Early in his career Derek worked with such luminaries as Alex Guinness, Kenneth More, Lawrence Harvey and Gina Lollobrigida.  Later he shared sreeen or stage with Helen Mirren, Daniel Craig and  Benedict Cumberbatch.
Best known as Bernard in Yes Minister, Mr Derek with Basil Brush and Oscar Blaketon in Heartbeat.
There's a note too from Frank Sinatra, Simon le Bon and Gary Barlow.
Derek's acting life took him around the globe, the outback of Australia with Olympia Dukakis, The National Theatre of Papua New Guinea with Michael Denison and Dulcie Gray to 10 Downing Street with Paul Eddington and Nigel Hawthorne. His character in the long running series Heartbeat, is known and loved by millions world wide.
With his heart resting easily on his sleeve Derek talks candidly about his personal life, his adoring mother and sister, his two wives, his many lovers and his one true love. It is a story that swings from triumph to bitter disappointment, from glorious unadulterated joy to appalling tragedy.
Best,  Michael." 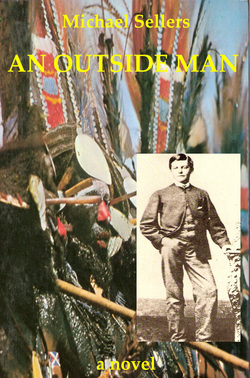 AN OUTSIDE MAN
The story follows the life of Fane Roskill, from his childhood in 1920’s peasant Somerset, to emerging   Australia, to untamed New Guinea up to the onset of the Pacific war. Fane and his mother set out on the long journey to New Guinea, where his father awaits. Tragedy follows when their ship is attacked by  natives. As a young man Fane is brought up in Australia by Stephenson,  a respected  hunter.  Though married, Fane frequents the brothels of Sydney  harbour and is implicated in the murder of a prostitute. Divorce follows and  shame forces him to accept a post in British administered Papua as a Field  Officer. (Lieutenant-Governor Murray has them as ‘outside men’). Fane’s exploits become legendary, the first man to trek for  months through the unexplored and dangerous heartland of the territory. A local  man, arrested by Fane, is found guilty of murder and hung. His tribe vow to  avenge him sending his father and brother to find and kill Fane. Disillusioned by officialdom and thwarted in his attempt to  woo the daughter of a dignitary Fane resigns to partner Albert Sui, an old  Chinese friend, in an aeroplane transport business. On a trip back to England  Fane marries his childhood friend who returns with him to Papua. They combat the hard and menacing life of the time. A war  with Germany, Japanese forces on their doorstep and natives violently resisting  the new order. They are joined by John Cooper, a pilot, who has close  connections to both their families. After discovering a terrible truth Fane’s wife is near to  emotional breakdown and joins a friend in the Highlands to help at a missionary.  Japan invades the island. Fane and Cooper attempt a hazardous rescue overland and by air.      To order from AMAZON UK  click here
To order from AMAZON US click here 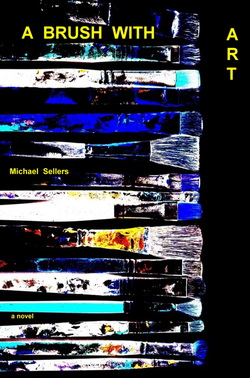 A BRUSH WITH ART

Arthur P. Bramble couldn't remember the first visit or who the visitor was. At fourteen years of age it might have been Picasso, General Custer, Robin Hood or, in a moment of precocious daring, Marilyn Monroe.

In the early years the visits were infrequent, no more than one every two months. The frequency increased during his late teens and early twenties and were entirely dependent on his preoccupation of the time.
When Arthur took up art it was fourteen years since the first visit and his conscious mind was no more aware of the visitations than it had ever been. But art has an uncanny way of seeping through cracks sealed by conventional behaviour. And Arthur P. Bramble was a conventional person, everyone knew. Everyone, that is, except his visitors.    To order from AMAZON UK  click here
To order from AMAZON US  click here

Cache on the Rocks

Although the coroner returned a verdict of misadventure when Tag Chumsty's body was found on a Cornish beach, his father refused to believe his son had died by accident. In an attempt to unearth the facts, he hires Cal Fisher, private investigator, and Cal thinks he has hit the big time because Chumsty is a rich man.   Of the two alternatives to accidental death (suicide or murder) Cal soon discounts the former when he discovers the dead man had been running an apparently successful business and had been spending much of his free time with an extremely shapely blonde. Which left him with murder and why on earth was Tag in Cornwall anyway? Cal's inquiries into Chumsty's movements before his death seem to upset a very diverse lot of people and upset them to the extent of wanting him bought off. Such offers merely increase Cal's determination to fulfil his obligations, even when the offers begin to get more violently persuasive.
Michael Sellers has already established Cal Fisher as an apparently inefficient but finally effective private eye and this new adventure happily continues the series. The writing is sharp and witty, the characters  precise and three-dimensional and the plot a wealth of ingenuity.
To order from AMAZON UK click here
To order from AMAZON US  click here 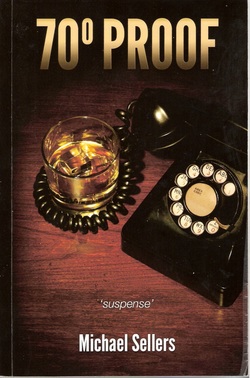 Cal’s  private detective work investigates the suspect death of  whisky magnate, Brent,  the violent murder  of a ‘Brent’ impersonator,  the import of counterfeit goods and the illegal export of drugs throughout Europe
and whisky to teetotal North African  states. From his (converted garage) office in Covent Garden Cal pursues antagonists to an island off Devon inhabited by Brents mistresses, a whisky distillery in the highlands of Scotland and the Lake District where  attempts are made on Cal’s life by villains willing to kill to
keep control.
Michael Sellers’ character, Cal Fisher, has already established himself as a laid back but dogged and successful private detective. The ingenious plot of 70° PROOF  continues  this jaunt through Cal’s unorthodox and hazardous world. 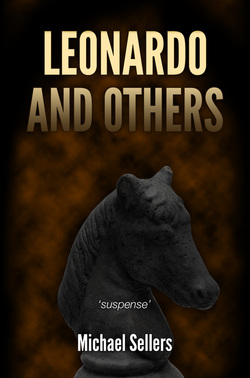 Calouste Fisher, ex-policeman turned private detective with a practice in the heart of Covent Garden, accepts a commission to trace a missing sculpture.
"It was my first art job, a welcome change from my other work. The divorce business was becoming more civilised by the day. Solicitors, accountants and therapists were taking over the detective business by fighting it out with headed notepaper and psycho chats."
Within twenty-four hours of his taking on the case a girl is murdered, Cal is shot at and the sculpture is mysteriously ‘found’. Cal is intrigued when the man who initially hired him approaches him again, and even more intrigued when the man meets an ‘accidental’ death before they can talk. Convinced that the sculpture is the cause of these deaths Cal sets out to discover why its whereabouts is of such importance. His
search cracks the veneer of a seemingly respectable art and antique business and also leads him into acute personal danger. 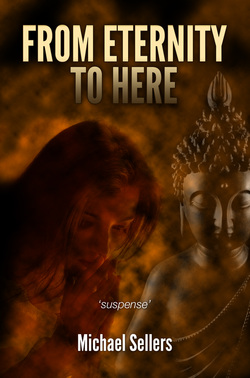 FROM ETERNITY TO HERE

Lady Alexandra Selve was twenty, shortly to inherit the vast Selve fortune and about to hand it intact to a bizarre religious sect: the Cosmotheistic Birds of Passage.
Her mother was naturally determined to prevent her daughter giving away her inheritance. She'd failed to get any result from her approaches to the Home Office, the police and the Archbishop so, as a final desperate resort, she hired a private detective, Calouste Fisher, to persuade her daughter
to abandon her commitment to this dubious 'charity'.
While Cal was determined to fulfil his commission (and earn a fat fee for his trouble), the guardians of the Birds of Passage were equally determined that no one should reach Lady Alex and remove her from their
influence. And as Cal becomes more heavily embroiled in the curious life of the sect, he realises they have something more sinister to protect than the fortune of one little rich girl.
An exciting, intricate and often amusing crime novel, and a splendid successor to Leonardo and Others.